When I’m craving a good read, the graphic novel is my go-to genre. When done right, the unique illustration and storytelling style of an author can pull you into a narrative before you know it. Here are some noteworthy recent (and in one case, upcoming) titles that may draw you in, too (pun intended). 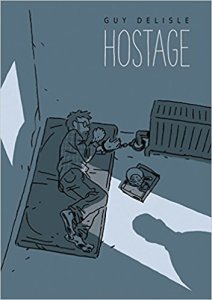 Hostage is from French-Canadian illustrator Guy Delisle, an adept and efficient storyteller who previously recounted his experiences in lands such as Burma and North Korea. In Hostage, Delisle tells the tale of Christophe André, who was kidnapped while working for Doctors Without Borders near Chechnya in 1997. Delisle’s panels, primarily done in tones of grey, offer a look into the psyche of a man held against his will for 111 days.

In Rolling Blackouts: Dispatches From Turkey, Syria, and Iraq, cartoonist Sarah Glidden tells the stories of individuals she meets in the Middle East while bearing witness to the ethical questions the journalist friends she is traveling with face. How far do you go to get the answers you want? At what point does someone else’s story become yours?

Poppies of Iraq, by Brigitte Findakly and Lewis Trondheim, offers a series of memories about childhood and family in Iraq. Born to a French mother and Iraqi father in the 1950s, Findakly grew up in an environment of political upheaval that began in 1958 when the monarchy was overthrown in a coup. With Iraq in tumult throughout the 1960s, Findakly’s family moved to France in the 1970s. The vignettes in Poppies intersperse sweet and sometimes humorous childhood memories with a look into how life was never the same under Saddam Hussein’s regime. 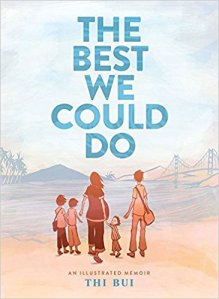 The beautiful debut graphic novel by Thi Bui, The Best We Could Do: An Illustrated Memoir, is a moving and highly personal tale of the immigrant experience. The birth of Bui’s child in a California hospital is the catalyst for her look back not only at her refugee journey from Vietnam, via Malaysia, to the United States, but also how her family reached that point of desperation with the rise of communism in the mid-1970s. Painted with washes of red, Bui reminds us that our history follows us wherever we go.

Acclaimed Canadian cartoonist Jeff Lemire is back following Secret Path with Roughneck. This gritty, fictional story centers on former professional hockey player Derek Ouelette, down and out in his hometown after instigating a violent incident on the ice. Ouelette’s life is once again upended when he is reunited with his sister, who is seeking escape from her abusive boyfriend. Together, the siblings face their shared past and try to find a better way.

Liz Tham is a librarian at the Port Moody Public Library.